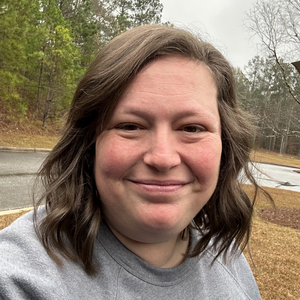 Meredith has been an active part of the Dravet community since her daughter, Eden, was diagnosed with Dravet syndrome in 2016. The DSF has directly impacted her life by advocating for approval of medications that were removed from the marketplace and connecting her with other families who are fighting Dravet syndrome. Because of these efforts, Meredith knew that she wanted to play a bigger part in the Dravet community, thus leading her to work at the DSF.

Meredith lives in Georgia with her husband, Jason and 3 kids- Eden (9), Elijah (7) and Easton (5). She loves organizing parties and events and is an active member at her church as part of the A/V team where she volunteers as an Audio engineer. Before having kids she worked at Starbucks for 10 years as a General Manager, overseeing her own store. After having kids and realizing that Eden would need constant medical support and intervention she became a stay-at-home mom and has loved every minute. She loves talking to anyone and everyone about Dravet syndrome and is passionate about raising awareness.