Dye It for Dravet

The Kuhn family has a 2-year-old daughter named Cora with Dravet syndrome. Since diagnosis in February of 2021, Cora has experienced over 12 hospitalizations due to unstoppable and life-threatening seizures that needed medical intervention. Cora’s mom, Jen, decided in October 2021 to donate her hair to a child’s cancer organization and also to dye it PURPLE in support of Epilepsy Awareness Month in November. Her hair color spurred many compliments and conversations about epilepsy, specifically Cora’s journey with Dravet syndrome.

Jen received her hair treatment at a local beauty salon called PRIM Beauty Bar in Shadyside, Pennsylvania. Her friend and hair stylist, Kelsi Morgan, helped Jen come up with the hair design and was able to make her dream come true. Kelsi is an amazingly kind, generous and creative soul. She was moved by Cora’s journey and Jen’s way to pay tribute to her daughter. She decided that anyone who decided to dye their hair purple during the month of November, she would donate $10 to DSF to support the Kuhn’s team fundraiser for the Dash for Dravet in November of 2021. Kelsi posted her fundraiser via her social media for PRIM Beauty Bar and was able to raise $100 as well as provide connections to those interested in learning more about Dravet syndrome and DSF directly. We are grateful for her thoughtfulness and way to contribute to our cause!

After the success of their fundraiser last November, Jen, who serves as a DSF Parent Ambassador, brought this spontaneous fundraising idea to DSF. As part of Dravet Syndrome Awareness Month this June, we set up Dye it for Dravet, to allow other families to participate. Fundraisers were encouraged to dye their hair, beard or mustache and show everyone they are committed to our fight for a cure for Dravet syndrome. It has raised over $13,000 and counting!

We wanted to thank Jen and Kelsi, and show our community how these types of creative fundraisers can really make a difference! If you have an idea for a similar fundraiser, please contact our Campaign Director, Misty Ried, to discuss how to bring it to fruition! 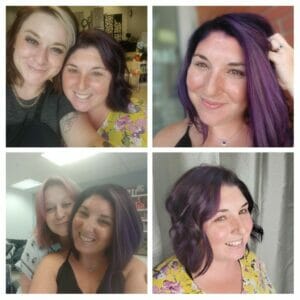