In this Community Spotlight meet Nathan Blatt. On May 23rd, Nathan competed in the Ironman 70.3 Chattanooga in honor of his sons, Cooper and Colton.

After receiving a diagnosis of Dravet syndrome when Cooper was 1 ½ years old, Nathan and his wife, Whitney, were also tested for the genetic mutation. Tests revealed that Whitney, who was several months pregnant with their second son, carried the same genetic variation. Shortly after he was born, Colton also tested positive for the variation.

Nathan says, “I wish I had the scientific knowhow to solve their issue, but I don’t. The best way I know how to personally help is to fundraise.” With that, Nathan created the race team Race Away Dravet and set a goal of raising $10,000 for DSF. Nathan didn’t just reach his goal. He surpassed it by $569!

From the entire Dravet community, thank you Nathan for raising funds and spreading awareness in honor of Cooper and Colton. 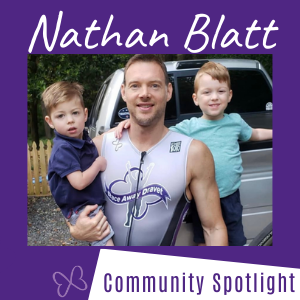 Jamie holds a B.S. in accounting from Rutgers University and is a licensed certified public accountant. She has 7 years of experience in public accounting and over 10 years experience in nonprofit accounting. She currently serves as the accountant and Program Director for Dravet Syndrome Foundation. When not working, she enjoys volunteering her time, running, and being with her family. She and her husband Jason have three children, including a daughter who has a SCN1A-related seizure disorder.